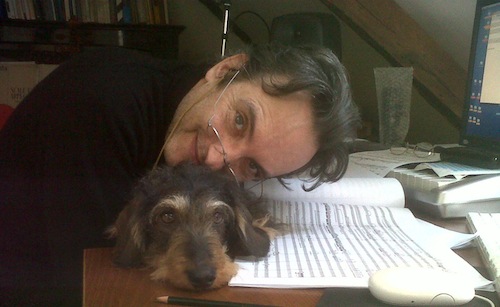 Andrea Liberovici (1962), born to Sergio, composer (1930-1991) (among other things, he worked on the creation of a new repertoire of traditional songs with Italo Calvino) and Margot Galante Garrone, (1941-2017, singer and founder of “Gran Teatrino La Fede delle Femmine”) grew up in Venice, with his mother and the musicologist Giovanni Morelli (1942- 2011). Since his earliest youth he started studying composition, violin and viola at the conservatories of Venice and Turin and also studied singing with Cathy Berberian.

While studying, at the end of the ‘70s, when he was 14 and 16, he composed and recorded two rock LPs, which were fairly successful. The experience with the show-biz has been vital to understand what he didn’t want: “shutting myself away in the cage of a musical genre to feed my vanity. And then, even today, I would not know which cage to choose. Wikipedia lists as many as 507 different music “genres”, from baroque to medieval metal…”

At the age of 20, he got on with studying composition, this time with a new approach: through theatre. “Theatre is the only art, which in order to exist needs to look someone in the eye. Theatrical approach is an excellent remedy for a composer. You must take your eyes off your navel and make clear what you want to say and to whom… being aware that if you have nothing to say, no genre will protect you.”

So, in 1996, thanks to a decisive and fortuitous encounter with the poet and dramatist Edoardo Sanguineti (librettist of Luciano Berio), he founded teatrodelsuono (sound theatre) together with him. This enabled them to explore new motifs within the relationship music- poetry-stage and new technologies for sound and image processing. Due to his originality and research, Liberovici has been repeatedly called a “transdisciplinary composer”, (being composer, author and director of his works). Surely, it is a demanding title, yet it adequately summarises his vision. The last work, Faust’s Box, is the peak of his exploration of different languages, which come to be woven together. “I believe that the composer of the future will increasingly look like an audio – visual composer, in that very order: Prima la musica!“

The canadian musicologist Jean  Jacques Nattiez, defined his work: “Andrea Liberovici is a composer of his time. (…) His works narrate the tragedy of post-modern humanity – Jean-Jacques Nattiez “Portrait of the composer by Frankenstein” 2006