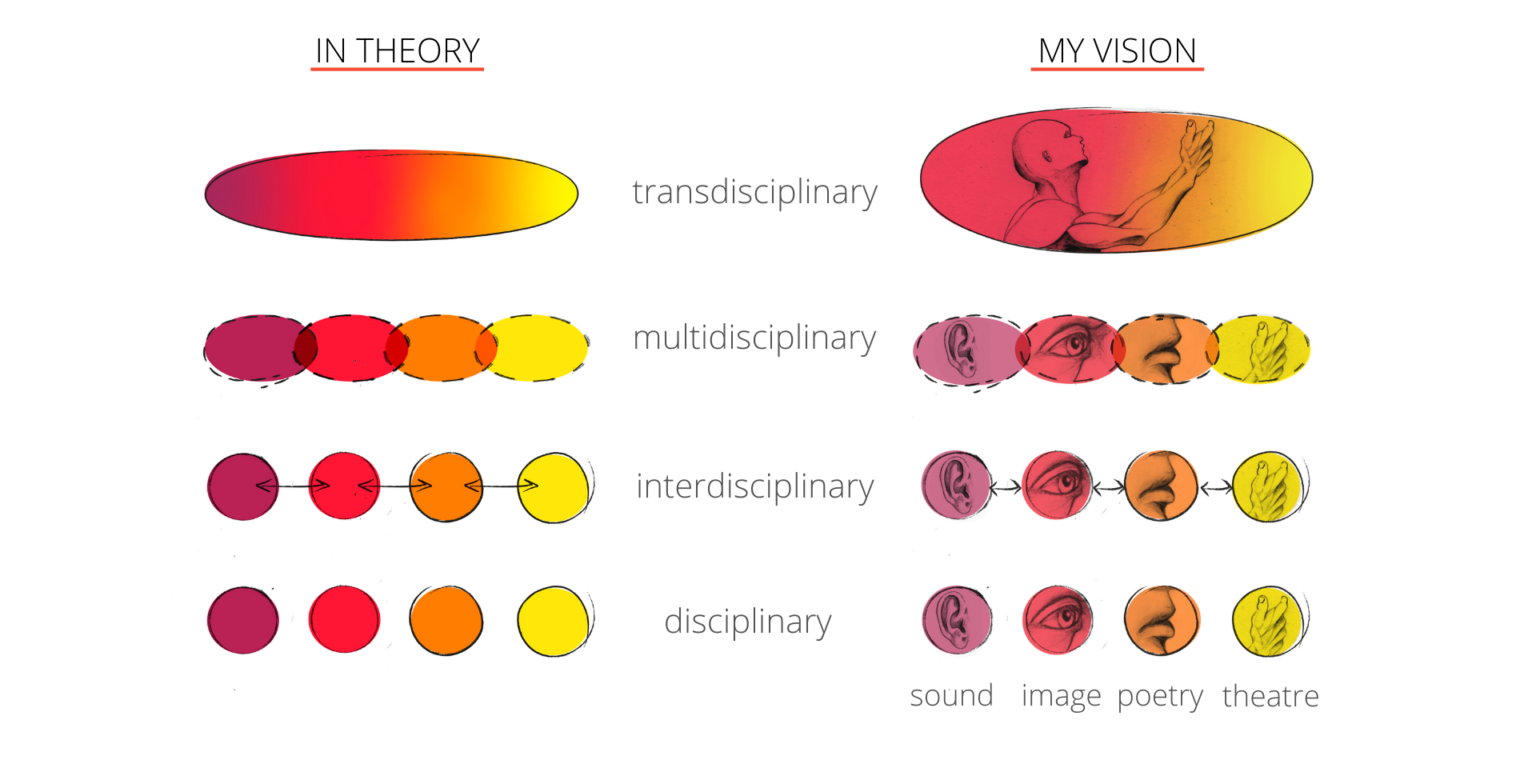 With regard to transdisciplinarity, the question naturally arises whether the extraordinary linguistic crises of the twentieth century were the root of a true change of paradigm which only now is beginning to be realized? Among many disciplines, are the acoustical and visuals arts, in a thousand different genres, still going through their own separate crises, or is some sort of synthesis arising from them, thanks to new technologies? Giving an example limited to music and visual art, was not the celebrated exchange of letters between Arnold Schoenberg and Wassily Kandinsky perhaps the seed, planted more than a hundred years ago, of what is springing forth today? This questions lies at the heart of my research during the last twenty years, in large measure because of my involvement in the theater, which has served from the time of its origins to unite all of the arts, fusing them together in a single vision. I am convinced that this points to one possible development of the physiognomy of the composer (already in progress for some years): no longer a strictly acoustic or “musical” composer, but a transdisciplinary composer. Every smart phone is potentially a new kind of piano with which we can “write” both music and images. As always, the challenge is to find one’s voice through one’s own questions, rather than to sound out the easy answers conventionally seen as proper to the algorithm. If we think about it, our body is the first and oldest transdisciplinary shape we know. I believe the time has come when even the artistic forms can merge with the aim of finding, first of all, a new empathy with our humanity.

Venice as a prototype for the future?

“The invention of the film and the phonograph came in an age of maximum alienation of men from one another, of unpredictably intervening relationships which have become their only ones. Experiments have proved that a man does not recognize his own walk on the screen or his own voice on the phonograph.”

Walter Benjamin: “Franz Kafka on the tenth anniversary of his death”

This sense of inadequacy with respect to one’s own representation, which Walter Benjamin brought to our attention in the last century with respect to cinema and sound recording, no longer exists. Its extinction, however, results not from an absence but, to the contrary, to an excess of an assumed presence, that is, the total adhesion to a technological image of “oneself” infinitely multiplied by social media. The paradox is that this multiplication through social media of a deliberately created image produces, in most cases, the exact opposite of what is commonly meant by the word “social.”
In brief, if social relations are founded above all on listening to the Other, this “social” period seems rather to be founded on the construction of one’s own icon, and therefore on one’s own mask, nearly to the point where we have all climbed onto the stage, leaving the seats of the theater empty.

Is beauty a question?

I believe that when humanity discovered fire, before grasping its real potential, it was necessary to get burned. In a similar way, the astonishing technological revolution that has made possible so large part of our present lives is, at the same time, burning our capacity to create, love, and explore beauty. But what sort of beauty is at stake, given that all of the canons of beauty classic, modern, postmodern, etc. have exploded into a myriad of different styles and genres? A phrase of Flaubert’s has helped me to approach this theme: “It is not the pearls which make the necklace, but the string.” We might add that a pearl with a scratch on it may alter the harmony of the necklace, while a frayed string threatens its very existence. If we apply this metaphor to beauty we could say that it is neither the quality nor the quantity of that which is visible (the “pearls”), but rather the quality of the string, or of the questions that underlie creation, which determine beauty. Do questions of human relations still exist at the root of the creative act? Is the creative act is still understood as a possible bridge between human beings?

Venice as a prototype for the future?

Venice, isolated in a lagoon, is the only city in the world without suburbs in the strict sense. This in itself gives it an aspect of unparalleled beauty. Even if it were not unique in this sense, there are no others which impose upon visitors, from the very moment of their arrival, such a strong sense of temporal jet lag. Anyone with a direct knowledge of Venice understands what this means in practical terms: the binding obligation to adjust to a slower rhythm. But by what secret mechanisms do time and beauty operate with such power as to transform the manner in which we walk, listen, look, and breathe, every time we enter the city? Clearly there are no univocal answers, only a multitude of interconnected clues which, because they are alive, are difficult to conceive within the confines of an urban “museum.”
Here is an attempt to list the salient categories as I perceive them: sound, theater, and vision. Despite the tourists (or perhaps because of them), Venice is a city of listening. The morphology of the city, which acts as a kind of sounding board, seems almost to have been designed by luthiers rather than architects. I refer not only to the labyrinth of acoustical refractions of concrete sounds such as water or footsteps, but of the typically Venetian public square (“campiello”), a characteristic feature of its urban design, as an ideal stage for social encounters, serving in this way as a great theater of voices, bodies, and ideas and thus a vision of a humanistic culture.
Venice, therefore, in its architectural intertwining of life and art, may be conceived as a gigantic, floating, transdisciplinary work (extremely ante litteram), and thus the prototype of a future people-oriented society.