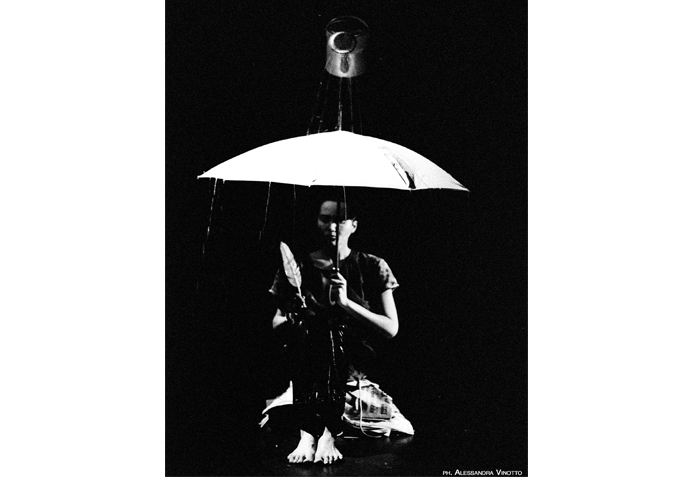 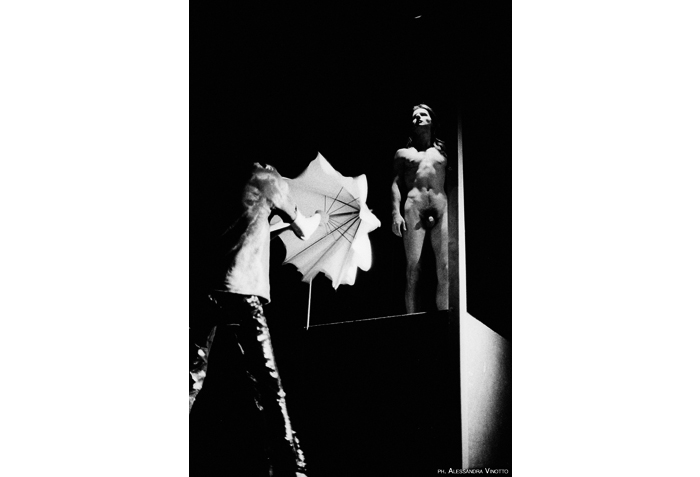 Liberovici places and sets up his play between two very different time zones: the first recalling the age of Shakespeare (indeed he extends it to Henry Purcell, a Seventeeth century composer) and the second the contemporary one. Te later is further divided between experimental music on one hand and popular music, like rock, disco, rap, on the other.
The two zones are melted together in a new hybrid, combining different sources: besides the rhythm of percussions, the string prevail, ranging from the lute to the electric guitar. Liberovici blends the Elizabethan context in his work by using the musicals instruments of the time instead of the operas. He does not draw from the wealth of musical pieces written for the theatre either. What can be perceived are references to dances of the time and probably a quotation of Purcell. On the contrary rock-and-roll rhythms are very evident: through the almost obsessive repetition of the chords, Liberovici obtains certain sound twists, remembering Jimi Hendrix.
If one considers the musical research carried out in this century, one can perceive in Sonetto some remembrances of Mahler (as in the counterpoint to her nr.43 sonnet “Whose shadow shadows doth make bright…“. But especially strong is the the reference to the Musique Concrete, through the combination on tape of noises and sounds belonging to daily life, carrying on the experiments fo Pierre Schaefer during the Forties.

Excellent show, absolutely unusual, which looks for new ways, new techniques for communicating the life that flows in man. The scenographies are also very beautiful, and essential, made up of lights and scattered books.
di ROSSELLA FABIANI
da La Stampa, 01.04.1998

The musical score ranges widely between cultured and consumer traditions to moments of effective creativity; but above all it moves happily in combination with the “verbal materials” available, where Liberovici, the director, manages to infuse the performance with an opportunely coherent visual configuration; through the sobriety of the choreographed movements, through the non-insistent search for objects or symbolic gestures, between doublings of character and sober uses of light.
di FULVIO BARBERIS
da La Repubblica, 13.02.1997