Home » Portfolio » Music » NOT A SILENCE

from and for Giovanni
for alto solo, string orchestra, celesta

An indecipherable chord because it is difficult, clotted, and also because it comes from an in-strument with totally resonant sounds, from timbre to timbre, differently extinct, the sound disappears into the very air that had generated it. So there’s nothing else, because it is right that in the representation of what remains, beyond the distance, and after its material loss there is only, and truly only, profound nothingness. Not a silence.

NOT A SILENCE
for alto, string orchestra and celesta
from and for Giovanni 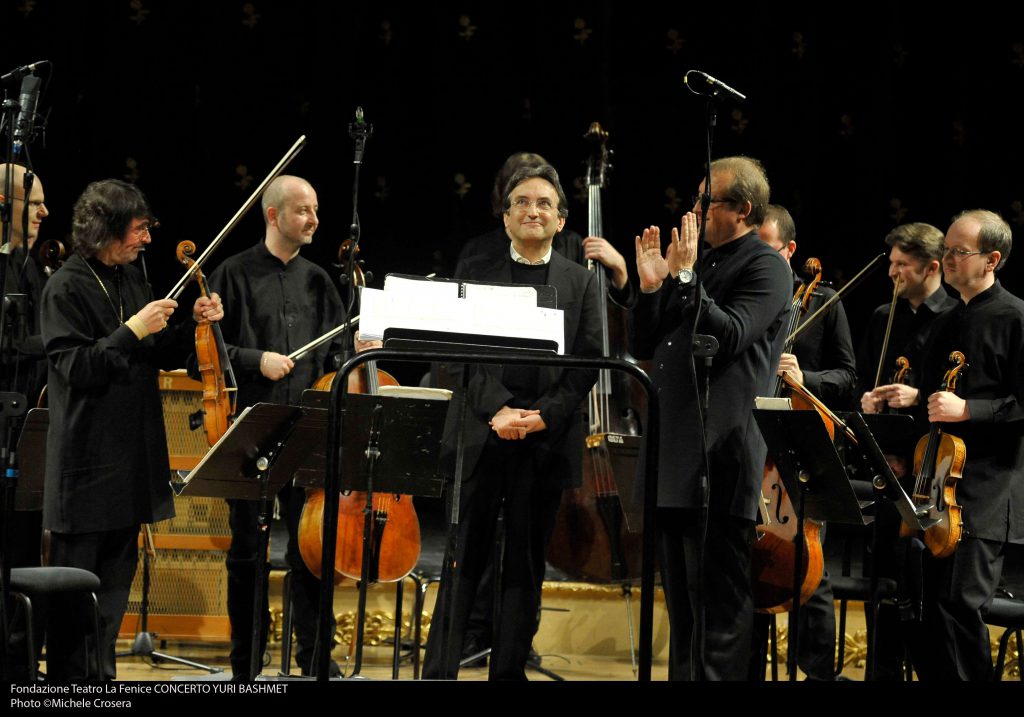 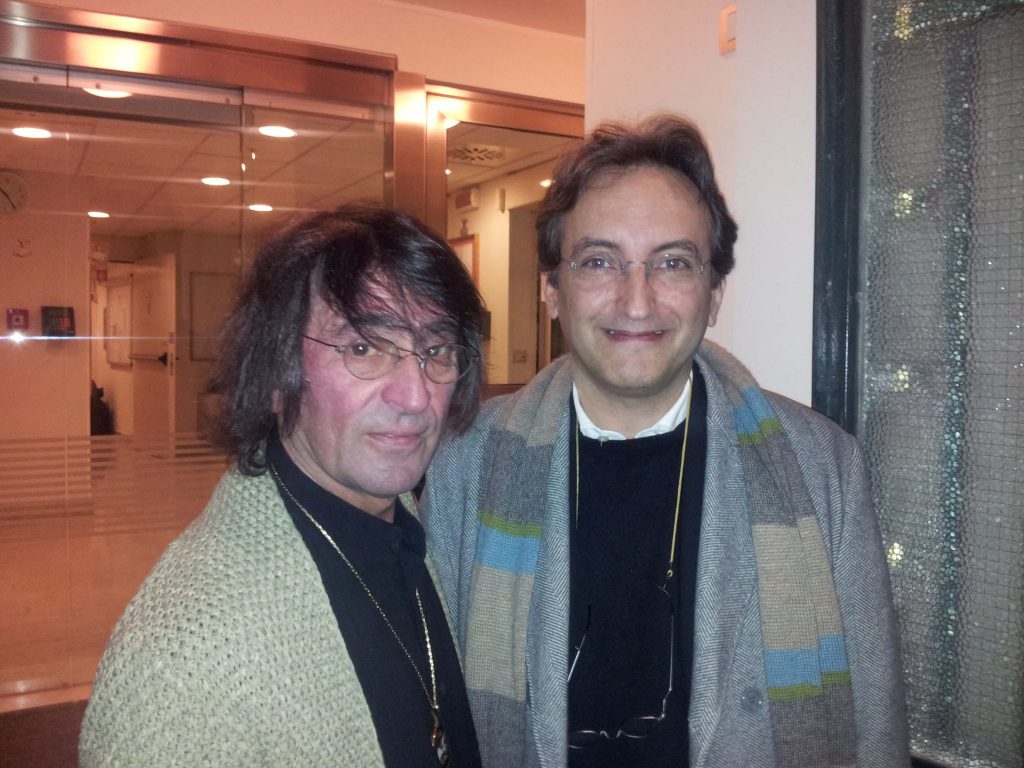 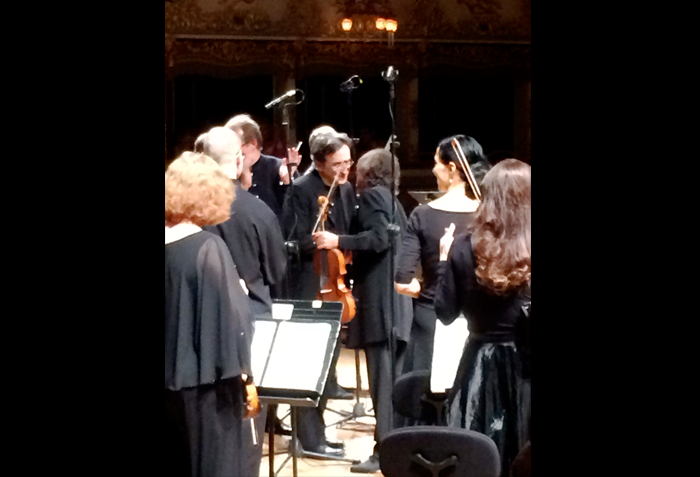 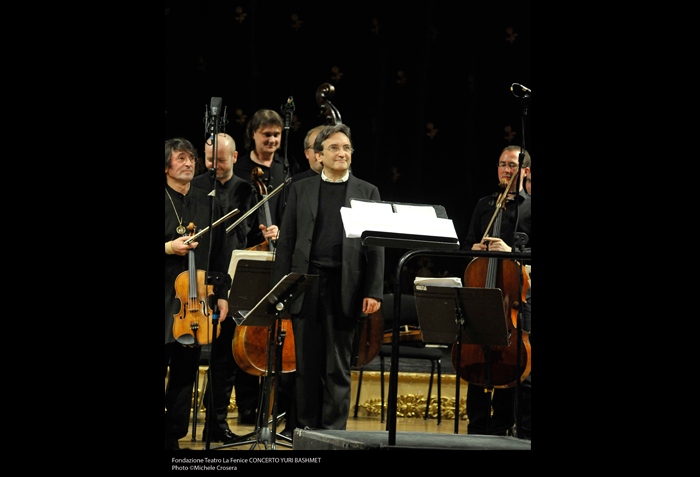 Yuri Bashmet and his Soloists at La Fenice
“Liberovici’s work is a sort of metaphysics of silence or, better yet, the imperceptible vibration that might laically be identified with the concept of soul, but al-so with the sound of the unknown universe, inau-dible and elusive. In this piece, Yuri Bashmet’s viola stood out for its musical sensitivity, beautifully bac-ked by the other instruments in an interplay of cre-scendos and silences, drawn-out chords and tren-chant sonorities, the icy notes of the celesta and short, sharp bowing, expressing what only music can evoke. To do this, the young composer started affectionately with letters, corresponding to three notes, which compose the name and surname of his unforgettable mentor: G, A, E. A rousing round of applause.”
Roberto Campanella, GBOPERA Magazine

Liberovici at La Fenice with Bashmet
“Non un silenzio is a work that is broad in scope, in which composition in panels is organized according to a specific structural idea. Bashmet’s prodigious viola speaks in fragments, with enthralling soloist drama accompanied by the ripieno strings. The epi-logue closes in silence, with the notes of a farewell punctuated by the plaintive sighs of the celesta, pe-rhaps an allusion to the ‘profound nothingness’ cited by the late musicologist Giovanni Morelli, who died nearly three years ago.”
Mario Messinis, Il Gazzettino

The threshold of silence. Bashmet and Liberovici
“Yuri Bashmet has the ability to suspend time, to li-sten to the finest sonorous structures and carve through silence, bringing with him the brea-thlessness of those who have followed him, enraptured.… The tripartite form of Liberovici’s Non un silenzio conceals a quite varied composition with one instrument per part which, through the skilled use of colours, brings out the stratified concurrences of reality. Sounds are captured as they emerge from the icy surfaces of the bowed strings, taken up by the astral touches of the celesta evoking absence.
Letizia Michielon, Il Giornale della Musica

Yuri Bashmet at La Fenice
After Sviridov, Shostakovich and Stravinsky, Andrea Liberovici’s Non un silenzio for viola, bowed string orchestra and celesta is one of the gems of this year’s concert programme.
Alberto Massarotto, VeneziaMusica

Bashmet’s viola is seductive; Liberovici dedicates his work to Morelli
“Bashmet lets others direct so he can shoulder his viola, which plays a key role in this work. This piece is filled with emotional allusions. The score is com-posed of drawn-out sounds, rapid crescendos, long silences of most of the musicians, the pleading of the viola that – alone – attempts any discourse, while any other intervention immediately falls to the wayside. The short strokes of the celesta resound in the emptiness. This is a reflection on the impossible silence of the cosmos, on the vibrations emanated by every living being.”
Massimo Contiero, La Repubblica